We have a collection of spindle Santas that I have bought as presents for my husband over the past few years.  They are made by an amazing local artist named Barbara Tierney and we love putting them out every year.  The story as to why I bought them is one of those inspiring, sad, frustrating, happy, and celebratory stories. 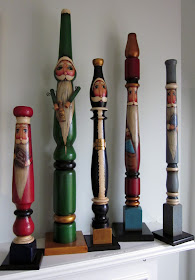 The story starts back in 2005 when my husband, who is an academic, was madly finishing a book he had been writing all year.  He assured me it would be completed by the end of the year.

When I was out at a local Christmas craft show in Toronto and saw these spindle Santas,  I was immediately taken with Barbara's amazing talent, but also loved that she used vintage staircase spindles.  We got to talking and she said that she could personalize them in any colour, shape, style etc.  I took her card and then contacted her later to see if she could make me one to commemorate the completion of my husband's book.
That Christmas I gave hubby the short red one on the left holding a copy of his book. 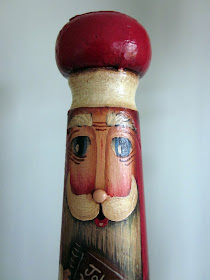 Don't you think Santa looks a little worn out - pretty much how my husband looked at the time.  Any of you who know writers will know that it always takes longer than you think to get a book finished and off to the publisher.  Well Christmas 2005 came and went and we all enjoyed our new spindle Santa - and hubby contiued to write!
During 2006 the one book hubby was writing, morphed into four books.  By Christmas 2006 hubby assured me that this was it - all four books were going to be done within a month or so.   I contacted Barbara again and had her make two more spindle Santas to give to my husband for Christmas.
This time I had her paint a Santa holding the remaining three volumes -

and a Santa wearing sunglasses and holding a bottle of beer - relaxing! 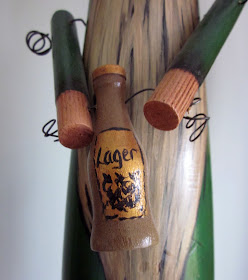 You might think that is the end of the story - but oh no!  It's never over till it's over when you are writing a book.   Just as my husband was finishing his books in February 2007, the publisher told him they were not going to honour the contract and would not be publishing any of the books.   That was a dose of bad news, I can tell you.  So my husband wrote to other publishers and finally found one to publish two of the four books, but they had to have a different title and needed to have more work done on them since the new books would no longer be part of a set.   Sometimes things work out for the best, though, and according to my husband, all that extra work on the books actually gave him the time and incentive to really improve them.
Both books got submitted to the new publisher by June 2007 and one was published later that year and the other in early 2008.   So for Christmas 2007, I gave hubby two more spindle Santas each holding one of his books. 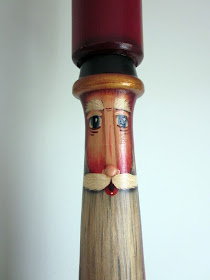 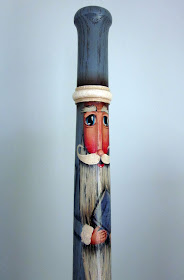 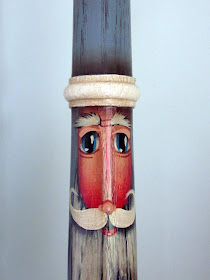 In September 2008 we had a book launch party to celebrate the publishing of the books with family and friends.  Since the books were about a 19th century English periodical, an afternoon tea seemed very fitting.  I've included a few photos of our afternoon tea because it was just so much fun. 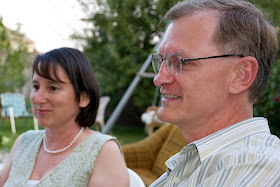 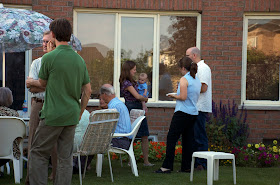 Just this past month my husband got word that he has a publisher for another book.  He will be using much of the material from one of the original four volumes, but it will need extensive re-writing, including some new material and an introduction.
I see another spindle Santa in our future!

Linked to Sentimental Sunday at Sit Relax and Read
Grace @ Sense and Simplicity at 6:00 AM